If there’s one thing I’ve been taught, it’s to find the silver lining in everything.

I usually devour most of my books in the summer, reading outside in the sun. This year, most of the reading happened in spring and inside, but it still happened. I must say, I’ve loved nearly every book I’ve read, which is why I wanted to record that before it fades away from my memory, like a lot of things from this hell-of-a-year. Without further ado, here are the 30 books I’ve read in 2020: 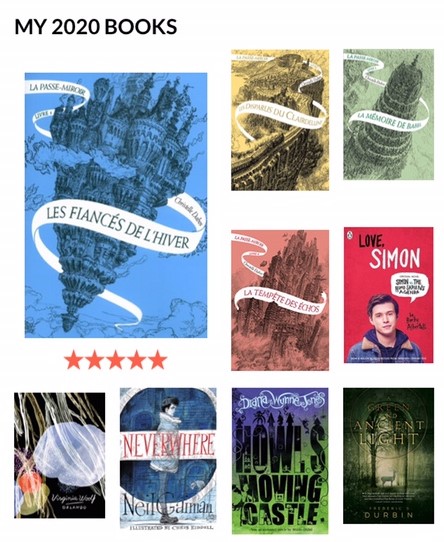 I started the year by re-reading the La Passe-Miroir saga by Christelle Dabos. I (travelled to Sout Korea and) caught a good’ol flu and got stuck in bed, so I used that time to read the last book of the saga in one day. I’m afraid I don’t remember everything because of the fever, but I didn’t enjoy it as much as the others (book 1 and 2 are gems), and I felt like she tried to tie up a plot that was all rushed in one book instead of evenly distributing the clues across all four books.

I finally read Love, Simon which I found at my local library (it took me until May to give it back). Not so memorable but sweet.

I had to read Orlando by Virginia Woolf for my English class, which I unexpectedly enjoyed! Really liked the travelling and the whole changin-gender-and-persepctive-on-life-thing. Didn’t understand all the grammar though…

Neverwhere by Neil Gaiman was greatly recommended to me by my friend. I liked it, but it did not make it to my Best Book list (I may have missed the point; or not, reading is also about the reader).

When quarantine hit, I watched Howl’s Moving Castle and got obssessed, so I downloaded a pdf version of the book by Diana Wynne Jones and to my surprise, finished it quickly (I hate reading in digital). I decided to buy a physical version which is now sitting on top of my other books and which I look at lovingly regularly. Definitely made it to the Best Books list.

A Green and Ancient Light by Frederic S. Durbin was unexpectedly good as well. I really enjoyed the nostalgic and whimsical feel it had. The fantasy was really subtly tied into the plot making it so real and believable. Would recommend to read with a cup of tea in the sun. 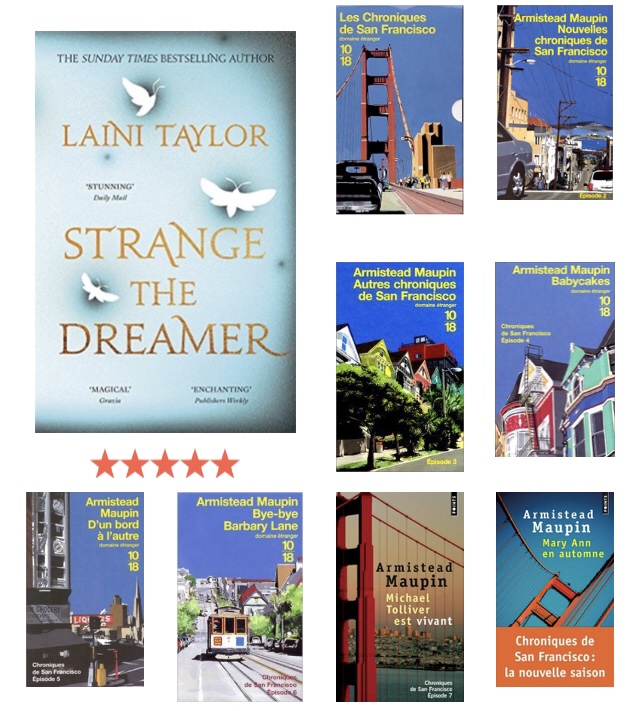 I got Strange the Dreamer by Laini Taylor as a gift and it was so good that I used post-it to mark the beautiful writing that struck me. I ordered the second book as soon as I finished the first one.

This was that moment during lockdown where things at school hadn’t kicked in yet so I had still plenty of time to read. I decided that I was going to read Tales of the City by Armistead Maupin, and not stop at the first book like I had done previously. I powered through all the books until Mary Ann in Autumn, which I set quickly back aside because of the terrible French translation (my parents bought them so I only have French copies). I wish I could have read those when they came out (haha) because I felt like I was missing the revolutionary aspect of the books. I did fell in love with San Francisco even more though. 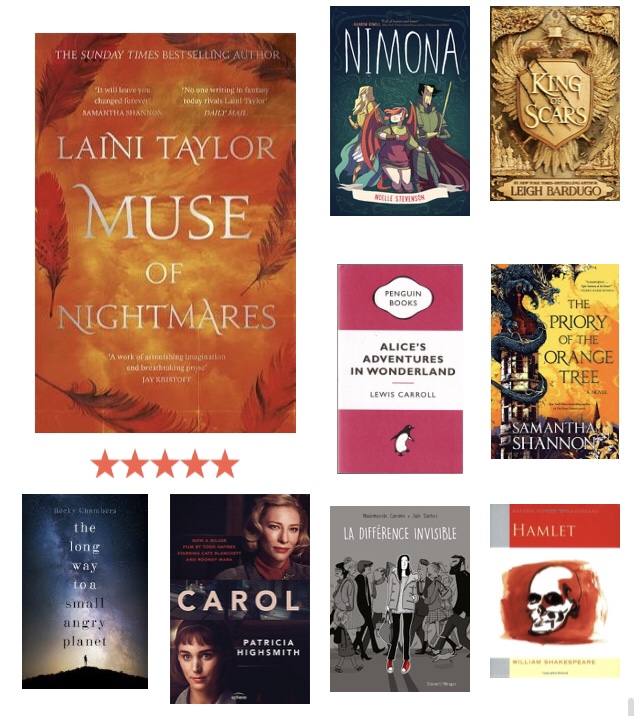 The Muse of Nightmare is the book continuing Strange the Dreamer, and it did not disappoint. Probably a Best Book of the year for me.

Then I discovered the animated series She-Ra on Netflix, written by Noëlle Stevenson. It was one of the few things that got my through the spring lockdown, and I decided to check out Noëlle’s previous writings. Here comes Nimona. A fun, quick read, unlike anything I’ve ever read. Also, lovers-to-ennemies anyone??

King of Scars by Leigh Bardugo was a long awaited read. I had loved the character of Nikolai in the Shadow and Bone trilogy so it was a pleasure to meet him again in more details. I loved seeing how the author depicted Nikolai’s royalty as a daily job and the insight on what it takes to be king (in a fantasy world of course). It also provided me with the fantastic quote « We hope or we falter » by Nikolai.

During my summer internship, I used commuting time to read Alice in Wonderland by Lewis Carol, which I had never read before. I loved how completely crazy and weird it was although I struggle to remember much more than that. A quick read.

The Priory of the Orange Tree by Samantha Shannon was another recommended read and thank God it was! A fantasy story that deserves a nice lit place in my Best Books list. It had everything I love: dragons, swords, magic, pirates and lesbians (!!!). I constantly found myself pleasantly surprised at the fact that it was a matriarchal society and that every insignificant characters were women: I always saw « the two guards » and designated them as men, only to be hit a few lines later with « both women ran ». Made my heart swell a bit not gonna lie. Also platonic and non-ambiguous male-female friendship?? Bless Samantha Shannon.

Again, recommended read, The Long Way to a Small, Angry Planet by Becky Chambers. Here I need to stop and say: this book provided me the serotonin I needed to get through 2020. Think, the best found family trope I’ve ever read, but in space (space!). I literally loved that book so much that I am reading this book again at the moment (we’re January 2021). I found myself giggling out loud and grabbing my covers when reading in bed. My Best Book of 2020.

Carol by Patricia Highsmith was also a library find (I had seen the movie before so I knew what I was getting into). It took me a long time to find it becoming interesting, but overall I’d say I liked the book. Both characters were pretty unsettling to me (but that might be because of the time period??). I didn’t remember much of the movie so I couldn’t compare. Yet another book I didn’t realise had had such an impact when it came out.

Another library find, La Différence Invisible by Julie Sachez. An illustrated story about a woman finding out about her autism. I read it in one sitting, and found it very interesting and myth-busting. Would recommend! (I’m also told that a certain sneaky sister spotted the book on my shelf, took it to her room and read it in one siting too. So, a good thing I brought it home).

Then, and yes I am not kidding, I did read Hamlet by my own will. I actually had a copy I had borrowed from my friend more than a year ago that I had to give back quickly. It contained all her notes from studying it in her American Literature class so it was super interesting to have the explanations on hand! I found it hilarious, such as when Hamlet exclaim « What an ass I am! » or when the Queen absolutely destroys Polonius with a « More matter, with less art ». Hamlet really is the dumbass emo prince the world of tragedy needed. 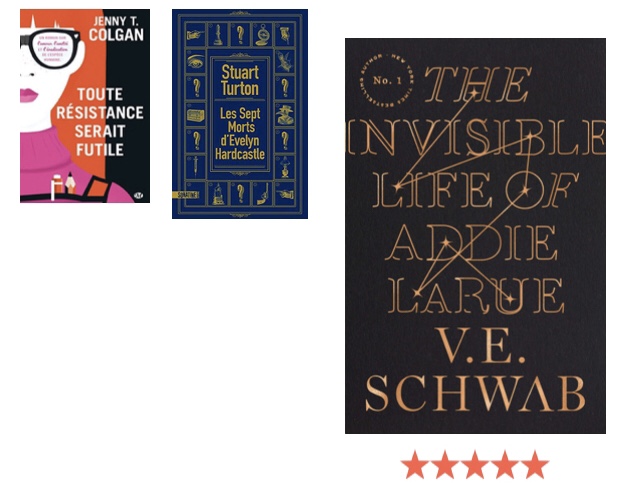 We’re getting to the end! Following my excitement about space and aliens by Chambers’ book, my mom suggested I read Resistance is futile, which I really disliked. Obviously because of the French translation that bugged me to the point of translating every dialogue back to English in my head with simultaneously reading, but also because of the plot (and the characters). The main character was a I’m-not-like-other-girls type, mixed in with I’m-ready-to-die-for-this-guy-I-met-literally-a-week-ago. Forced dialogues, a plot I could see from a mile away, an alien that weirdly read like an autistic person (weird huh) and a romance thrown into the whole like flour in a sticky dough. One thing I liked was the final take of the author on how aliens are waiting to communicate with us humans because they don’t think we’re ready yet. Seeing the state of the world, I can only agree. See that chapter from Chambers’ book about the necessary intra-species wars necessary for a species to mature before launching into space (did I make connections?? woohoo!).

The Seven Deaths of Evelyn Hardcastle by Stuart Turton was a weird one. I got bored pretty soon but at the same time, I couldn’t resign from reading it? Like I was turning pages and sighing at how many I had until the end, but I still read everything. An overly complicated murder scene ties in with a Bigger Plot with a Unexpected Twist near the end. I didn’t really connect with the characters (although I think that it’s a good thing seeing them). Entertaining and mind twisting, makes more for a summer read than a Best Book contender.

And last but certainly not least, The Invisible Life of Addie Larue by the one and only V.E. Schwab. The Christmas break read, sitting on the couch with a box of chocolates and Christmas music playing (at least that’s how I read it, not how I’d recommend to read it). I think I still have to make my mind up on how I feel about it. I should mention that the author whom I follow on social media had really promoted the book early, so it is very possible that I had high expectations. Most of all, I felt like the whole book was poetry. The writing was beautiful, to the point of being maybe a bit much sometimes. Not heavy as in incomprehensible, but I-need-a-break-from-the-beauty-to-appreciate-it-again heavy. I really connected with the character of Addie; her will to live and her never-ending wonder about the world really struck home (a bit too much to be healthy probably). I remember setting the book down and thinking it was a beautiful read, but I missed something to tie it all together, to draw the tear that would make it impactful. I can’t put my finger on it yet, maybe it’ll come with a reread, who knows. I’d still recommend it though, with a warning that the writing style is not characteristic of the author.

So there it is, the Great 2020 Book Wrap Up for you! A reminder that you can find on the sidebar of my blog the books I’m currently reading.

I would finally like to address a special mention to two books that I started but never finished: So you want to talk about race by Ijeoma Uluo and Making our way home by Blair Imani. I have started both of these and they’re really good and informative, however without getting to deep, I read as a form of escapism and require a story to keep me going. Those two books, I would like to make a point of reading them and actually remembering what I learned with annotations and all. This stacked up on top of school work and I fell behind (Blair Imani’s Instagram is a much more practical way for me to learn during the term) but it’s just a postponnement!

To 2021, a year I hope filled with new readings and discoveries.