It was not a prom like you see in American teenage movies. Just a small party, with (not enough) pizza, candies, music and disco lights. With flower necklaces everywhere and bright grins. We took pictures before the sun went down, and even recreated memes together like the bunch of nerds we are ! 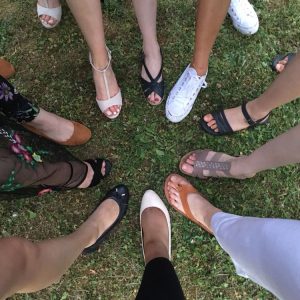 My friends and I took this time to celebrate the end of our exams and of the school year. I had been told that this year would be difficult. It has been, but not as I expected. I’m actually surprised of how little I studied compared to what I thought I would have to do. But all the time I spent not studying was spent doing so many other things !

I took part in a project called Arts en Scènes (@artsenscenes), which had me busy during weekends and holidays and, cherry on top, I spent about ten days in Hô Chi Minh City, Vietnam to perform among artists from different horizons and help a charity.

I applied to take part in an exhibition with the pictures I took for my dance project, which made me want to really get into photography.

I went to my first ever concert !

I also got to meet people, became friends with some of them, and consolidated friendships.

So this school year has been busy, to say the least. But I’m happy about it. I’m happy I made it through, I’m happy I managed all of this and, above all, I’m happy that I’ve been able to push back my limits further.

Despite all of this, I feel like I managed my finals pretty well. We’ll see the results soon.

Last night was prom night, and I enjoyed every single moment of it.